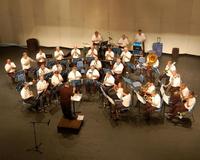 Mr. John Walter was the musical director of the Whitehall School

District, a suburb of Allentown Pennsylvania, for many years until he

retired to Avalon Manor. Mr. Walter placed an advertisement in the local newspapers
inviting musicians who would like to get together and play for fun to a meeting.
Thirty-five musicians showed up for the meeting. This group became the nucleus of the Middle
Township Community Band.

On September 2, 1998, while preparing to perform a concert, Mr. Walter
collapsed and died on the Cape May Gazebo band stand
doing what he loved to do playing his tuba.

In 2000, the Board of Trustees agreed to rename the band
The John Walter Cape Community Band
to honor their deceased founding member.

The band is an all volunteer band composed of 25-30 musicians.
Band members range in age from 15 to 84 years.
The band plays a variety of musical styles including marches,
Broadway show tunes, classical, pops and jazz.